Capturing Our History is an oral history project, undertaken by the Garda Síochána Retired Members Association, to mark the centenary of the founding of An Garda Síochána in 1922.  The purpose of the project is to record stories and recollections that will help to tell the story of An Garda Síochána across the last century, in the voices of the men and women who were there.

The next Phase of this Project will commence shortly with many interviews being conducted  in 2023. The history of An Garda Síochána intersects with the life and soul of this nation and it must not be lost.

The project is continuing to collect, archive and share material. In 2022, we were successful in an application to the Heritage Council Community Grants Scheme, which has enabled the generation, editing and entry of an additional trench of audio segments, adding to existing themes, as well as the creation of new themes including Human Stories, Historical Experience, Garda Work and Joining the Force. We are indebted to the Heritage Council for their support. 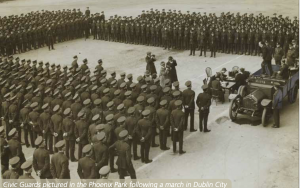